SHELLEY (INL) — Growing up in Shelley Bubba Ricker spent most of his childhood putting things together.

Between canvassing notebooks with schematics for woodworking projects and helping his father put them together, Ricker has always had a natural instinct for working with his hands.

Fast forward several decades and hundreds of handcrafted projects later, Ricker’s knack for putting things together still holds true in the same house and shop he grew up in. Only now, he works at Idaho National Laboratory as a design drafter in Nuclear Science & Technology’s Experiments Engineering organization, helping bring the lab’s critical experimental missions to life.

Before he was helping support the critical research missions of the nation, Ricker was helping support his mom. He recalls a day when a shelf that held the family’s laundry supplies became unstable and desperately in need of replacing. Ricker, however, thought otherwise. “I quickly learned that it could have been fixed easily, but I chose not to,” he jokes.

Upon disassembling and repairing it, a teenage Ricker realized the shelf came assembled when the family purchased it, meaning it wasn’t necessarily meant to come apart. After several grueling hours of piling it back together, the mounted shelf was nowhere near level, but in his eyes, was “good enough for a young kid.”

It’s here that his passion of creating something from nothing truly began to form. “It brings me a lot of enjoyment,” Ricker says. “It’s a satisfying feeling when you create something from your own idea.”

Ricker’s journey at the lab began in 1989, when he was working out of state and desperately wanting to move back home. At the same time, both of his parents were preparing to retire and wanted to sell the house he grew up in. Seeing a potential opportunity to get back to his roots, Ricker bought his childhood home, where he continues to live today.

As a child, he found himself constantly creating sketches and drawings, some of them for his woodworking projects. Following the adage of “do something you love, and you’ll never work a day in your life,” he pursued a career as a design drafter, a position he’s held at the lab for over 30 years.

Since 2001, many of his designs have served as the blueprint for some of the nation’s critical research experiments conducted using the Advanced Test Reactor (ATR), one of the most powerful research reactors in the world. Being the only reactor of its kind in the U.S., ATR produces the results of yearslong research in weeks to months, greatly accelerating the speed of experiments in areas pertaining to nuclear fuels and materials. The accelerated research timeline benefits groups like the nation’s military and universities across the country in supporting their missions and helps augment the competitiveness of nuclear energy.

A look at the inside of Ricker’s garage, where hundreds of projects spanning several decades have been assembled. | Courtesy INL

Creating something to call your own

Between then and now, Ricker’s passion for woodworking has blossomed immensely. He says being able to hone his craft in the same house and shop he grew up in has helped fuel his passion for creativity.

“I just enjoy creating things that I know are mine,” Ricker says. “Being able to make things for myself, as well as my family and friends is incredibly rewarding.”

Ricker says the process of developing his projects is simple. First, like anything, it begins with an idea, which he says can come from anywhere. He recalls an instance of spotting a beautifully crafted bench on a house porch while out for a walk that he instantly knew he would want to replicate but with his own unique spin, by incorporating a birdhouse into the design.

After developing the idea, he puts the design in motion. Ricker starts by finding the right material for any given project. In most of his work, including the bench, he prefers to use repurposed lumber for a more rustic look because in his eyes, “the longer they sit outside, the better they look.” Repurposed lumber is not easy to find, so Ricker often finds himself helping people tear out fences and decks in exchange for the wooden supplies.

Then, to get the proper dimensions for a project, Ricker will use an object that’s similar to what he envisions his finished project to look like. For the bench, this meant measuring a lawn chair. He then created varying mock-ups of potential designs in a sketchbook. Here Ricker’s work as a drafter begins to truly shine. 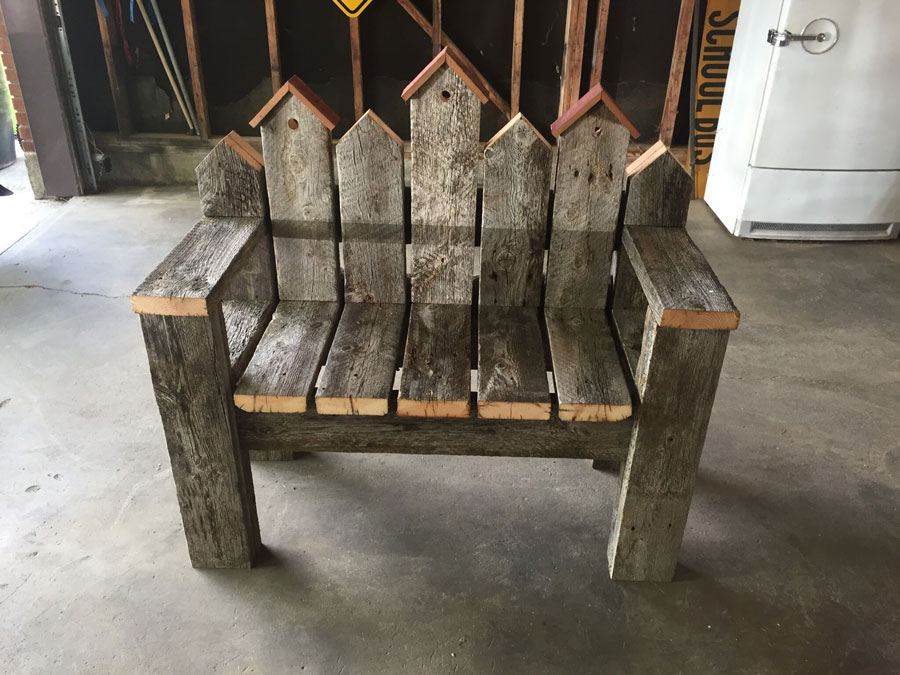 One of Ricker’s notorious birdhouse benches crafted using repurposed lumber. Over the years, the woodsman has assembled more than 100 individual benches for friends, family, and sometimes, even customers. | Courtesy INL

Finally, it comes time to build the project. Ricker estimates that when he first started putting the birdhouse benches together, he would spend between three to four hours building a single bench. Over the years, he’s been able to develop his skills to the point where he can build a bench in roughly 45 minutes, not including time spent preparing and cutting materials. He likes to remind people that he’s had 20 years of building experience to get to where he is today, and that “age adds time to projects.”
In his years of woodworking, Ricker has assembled hundreds of projects, ranging from shelves, decorative planes, chessboards and the previously mentioned birdhouse benches. He has built these items for friends, family, and sometimes, even customers.

Rickert says that while being able to craft something that he can say he made is creatively gratifying, the real reward lies in the reaction of those he is building them for. “The true satisfaction of completing a project is seeing the response of the recipient when you give it to them,” he says.

According to Ricker, the most challenging, but also the most rewarding, project he has designed and built was a crib for his first grandson last year. “It turned out really well. [It] was made with lots of love, and I hope it becomes a family heirloom,” says Ricker. “I put a lot of pressure on myself to make it as perfect as possible for my grandson.”