Carving Out History: Master of Maritime Quarterboards and Tavern Signs

HomeWoodworkingCarving Out History: Master of Maritime...

The aroma of fresh-cut pine chips just swept from a ship-shape studio meets shop-goers at Paul McCarthy Woodcarving on Route 9 in Manahawkin. They have no idea they’re about to step closer to Nantucket when they round the corner from the entry room into the workroom.

Think early-American tavern signs with hand-carved letters and scenes, and the stage is set for this shop that could become a destination. Architectural carvings and ship’s quarterboards are among McCarthy’s specialties, embellished in 23-karat pure gold leaf. His shop brings the quarterboard custom here from New England, where the ship nameplates were required by 1815 maritime law and then adapted to decoratively state the name of a home.

“I’d like to see more people in this area get tuned into quarterboards,” he said. “My clientele in Nantucket keeps me busy anyway, but I’d like for people in this area to see what I’m doing, and maybe they’ll see something they like. If they do, fine.”

The awarded wood-”cahvah,” as his New England tone accents, is a true master of his craft. He has earned national recognition through articles in National Antiques Review, Fine Woodworking, Yankee, Popular Mechanics and Signs of the Times magazines. Winning sign-making awards meant topping 35,000 other sign shops in the U.S. and Canada.

McCarthy’s signs add fame to already-famous places. This is the artisan who carved “Eastwick” out of the town of Cohasset to site the 1987 movie “The Witches of Eastwick.”

Scituate Harbor was the site of his first full-time shop, “The Carving Place,” starting in 1969. McCarthy came to Manahawkin to live with his daughter and family after being diagnosed with cancer in 2018, and he is doing well. He will take custom orders locally for signs, carvings, restoration and house numbers, and was known so well in Massachusetts that he is kept busy filling more orders from there. 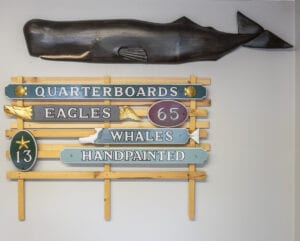 “I’ve done thousands of things; there’s so much variety of what can be done. I like to do thing people haven’t done in a hundred years. And if you’re credible, people see it and like it, and you’ve achieved one hurdle already.”

It’s been a long career since his first traditional American eagle, carved in 1958, which was inspired by his high school shop teacher, the late Robert Burgess.

Flip through the photo books for more samples of McCarthy’s work. There’s Sen. John McCain accepting a plaque heavy enough to hold the salvaged porthole of the aircraft carrier USS Oriskany – the ship was the base for his 23rd bombing mission over North Vietnam, when his plane was shot down and he became a prisoner of war. Joseph Farrell, CEO of Resolve Marine, had commissioned McCarthy to make the service plaque when the boat was going to be sunk to make an artificial reef.

But when you’re in the shop, scrapbooks take second place to meeting the master carver. It might take a measured instant as a visitor is gauged in that legendary New England way, but anyone with genuine interest passes muster.

McCarthy has been the in-house carver at the USS Constitution Museum, so he knows the colorful way to answer touristy questions. And fellow woodworkers are just as welcome.

“Eastern pine was the wood of choice of early American woodworkers. It was available; the other woods were used to build ships – cedar, oak, hickory.” Pine is durable and weather-resistant. Another reason: “Pine was the biggest tree. Where else were they going to find a tree big enough to do huge figureheads?” 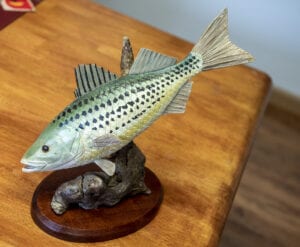 Lisiewski is making hand-carved and hand-colored wood boxes that McCarthy has advised her will be worth $175 for her talent and time. One is a compelling textured sunflower, the other a serene scene featuring a sea turtle.

“This is her own line of carving, her own project,” the teacher said.

As for his own products, he qualified, “This is not flea market stuff. It’s expensive, but that comes with the territory. Every piece gets a minimum five coats of paint.

“If they want nice, great stuff, they can come here. If they don’t like it, they don’t have to pay for it.”

Whales have been a constant subject for McCarthy. If you’ve been on Nantucket, you may have seen the leviathan on the Whaling Museum façade, which was commissioned in 2005 by the Nantucket Historical Society. Later that year he opened a new shop called “Nantucket Carving & Folk Art.” Besides at the Memorial Airport, all around the island are commercial signs with salty names such as “Brotherhood of Thieves,” “Wharf Rat Club” and “Brass Lantern Inn.”

From the shop “Nantucket Woodcarving” in the 1990s, he was responsible for many beautiful signs that visitors see as they stroll along the cobblestone streets of Nantucket. Among these are the “Atlantic Café,” “The Rose & Crown,” “The Jared Coffin House” and the chamber of commerce, to name just a few in the downtown area, plus hundreds of quarterboards that adorn many Nantucket homes.

In 1976, McCarthy carved the largest quarterboard at the time, 36 feet, for the U.S.S. Constitution Museum.

The broad spectrum of other early Americana enticed him to decoy and bird carving and finally into competition, winning awards for his carvings at the Ward Foundation World Wildlife Competition in Ocean City, Md., and the U.S. Decoy National Competition on Long Island, N.Y. His carvings are decorative, not the working decoy category that so many others have 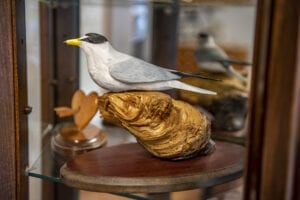 specialized in around here.

Paul McCarthy Woodcarving is at 145 Main St. (Route 9) in Manahawkin. The phone number is 617-842-7285; the website is paulmccarthywoodcarving.com.

Going full circle from his first eagle carving 62 years ago, his recent Peace Eagle represents the values of the United States, his bio states. It has 13 arrows for defense of the country, 13 stars and stripes for the original colonies, the preamble to the Constitution on a scroll, and a banner that reads “Make America Great Again.” This eagle will go to President Donald J. Trump.